The need for modernized information technology at government agencies is long-established, but progress toward transformation is often slow-moving. As recently as 2019, the Government Accountability Office found that 10 critical systems at 10 agencies were eight to 51 years old. This hinders advancement because legacy technology is harder to integrate, impeding data sharing; presents security risks; and can’t support digital efforts such as artificial intelligence (AI), automation, and machine learning. A broad, but solid, strategic plan from the Biden administration would give agencies a baseline framework on which to build their modernization approach.

“The federal chief information officer needs to have a high-level, strategic plan with its initiatives, each organization should have their own strategic plan, and then I think the [agency] CIO should map to both,” said Barry West, chief executive officer and founder of West Wing Advisory Services. “The individual organizations are going to have specific mission-related functions that they’re going to have to fulfill.”

For instance, a strategic plan for the Federal Emergency Management Agency will include major disaster response and recovery goals that would likely not apply to, say, the Food and Drug Administration. An overarching federal modernization plan, however, could include objectives such as establishing at least three new AI applications within a given time frame or setting specific cyber initiatives.

“According to the research firm, Gartner, 80 percent of government organizations are still at the initial or developing digital maturity stages, but about a third feel increasing urgency to transform.”

With a strategic plan in place, individual agencies can then lay out tactical plans, assign roles, establish governance and budgets, assess risks, and determine performance metrics. Agency IT leaders can balance those plans with day-to-day operations, charting a clear course forward.

But agencies shouldn’t make change for change’s sake—a common problem, said Chris Roberts, manager of federal systems engineering at Quest Software Public Sector. “In the rush to modernize, I think most of us, both in leadership and those in the application infrastructure side of things, we rush to do things just for the sake of getting to a new platform,” Roberts said. “Getting to a new platform does not equate to modernization. The first step in modernization is understanding what is out there from a physical or virtual infrastructure standpoint, but also: What is the workflow? What does the agency do? What is its mission? Then the individual contributors across the organization, what do they actually do?”

He points to the Internal Revenue Service, which had more than 400 discrete systems. To modernize, IRS officials had to understand why they were there and what law, mandate, requirement or rule they met.

Another challenge to modernization is the sheer number of systems many agencies have. That can complicate prioritization of what to modernize first, what to eliminate and what to consolidate. The agency-level strategic plan should include prioritization based on what is mission-essential and what best fits considerations such as budgets and staffing.

“I have been a chief information officer at six different agencies. At every agency I walked into, we had hundreds of tools everywhere,” West said. “It was almost like all the infrastructure people were proud to show me all the tools they had, but they couldn’t really show me that they were all working seamlessly together, that they were all being used, that we were getting our return on investment.” 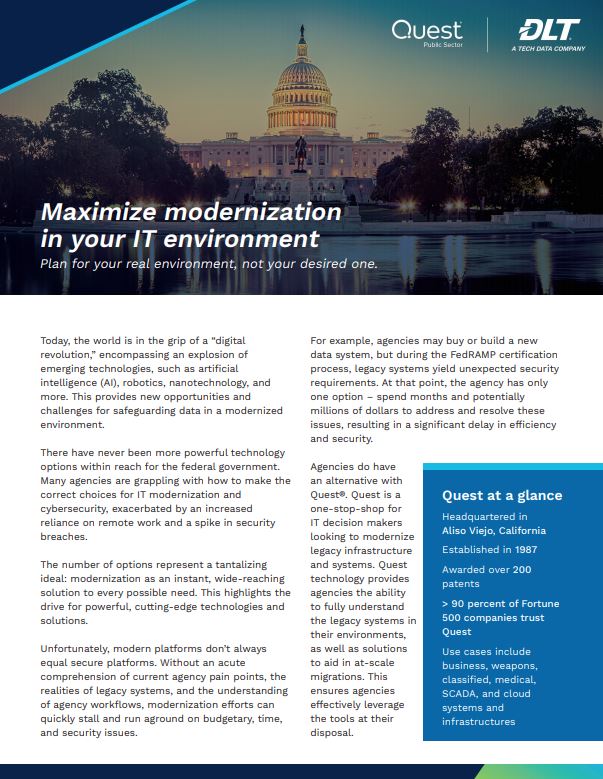 According to the research firm, Gartner, 80 percent of government organizations are still at the initial or developing digital maturity stages, but about a third feel increasing urgency to transform.

Indeed, in recent years, the federal government has made modernization a clear priority. In 2017, the Modernizing Government Technology Act became law with the goal of facilitating the replacement of legacy systems. It established the Technology Modernization Fund from which agencies could borrow money for approved projects.

In addition to strategic planning, strong support from leaders is also important to modernization initiatives, West added. “You’ve got to have somebody who’s driving this from the top and working with the business units and the components to make sure that it stays on track,” he said. “It can’t just be the CIO saying, ‘Hey, it’s going this way.’ You have to have that agency buy-in, and the business units have to have that buy-in and almost own it with the CIO.”

To understand how modernization can improve government, Roberts pointed to the COVID-19 vaccine distribution. Because some of the vaccines must be stored at cold temperatures, it’s important to track its path from manufacturer to shot recipient. A modern system can do that.

For instance, a Quest Software solution can collect temperature information and roll it up to a higher-level dashboard so that officials can see and validate that proper procedures were followed. This process speaks to the larger issue the government faces. Roberts said: “These data points are all over our agencies, but how do we collect them, how do we store them and how do we report them?”

The importance of modernization has never been more apparent: By 2023, more than 80 percent of the government’s digital implementations that do not build on a technology platform will fail to meet objectives, according to Gartner. The pandemic accentuated that point. When people moved from onsite to online work, agencies had to act quickly to ensure their infrastructure continued to allow employees to provide data and the public to access it. Moving forward is important. Doing it right is crucial.

To learn more about digital transformation, click HERE to download a complimentary copy of the whitepaper, “Maximize modernization in your IT environment – Plan for your real environment, not your desired one.”

LogRhythm@LogRhythmAs #ransomware continues to be a lucrative source of income for #threatactors, preparing for these attacks needs to… twitter.com/i/web/status/1…14 hours ago28 January 2023